Why the progessive movement is suddenly torn over AOC 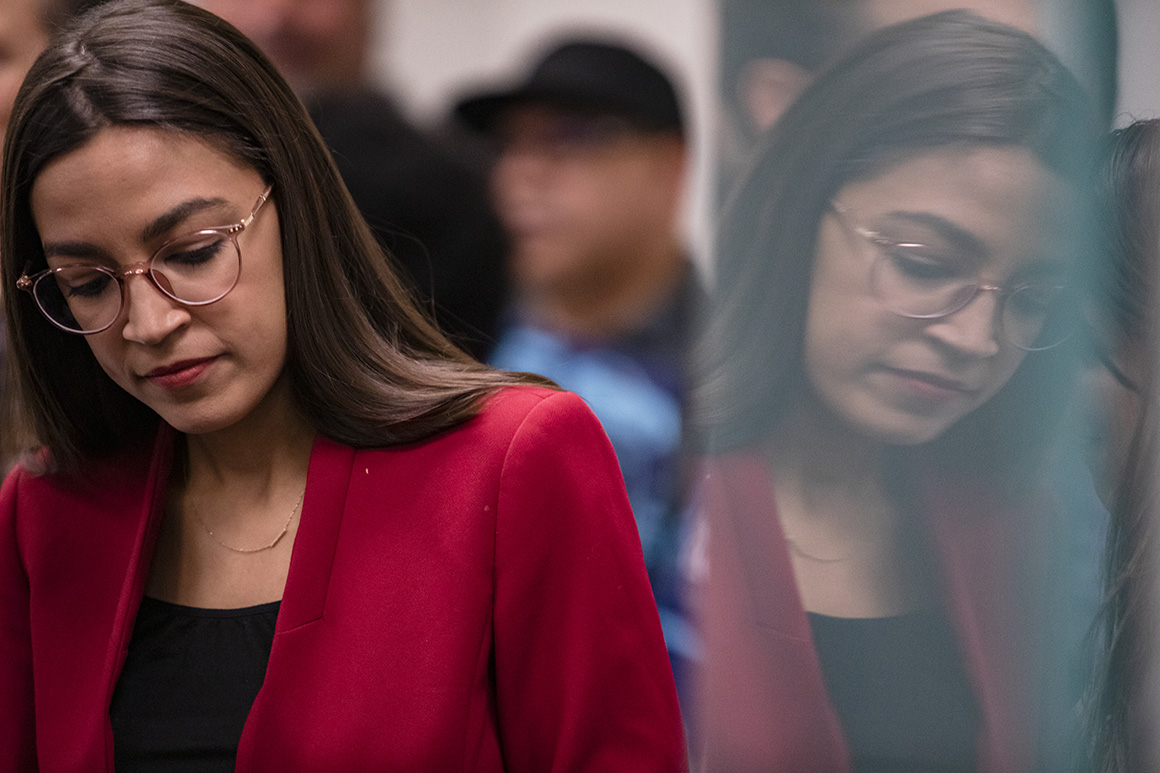 Soon after her upset primary victory against a Democratic Party boss in 2018, Alexandria Ocasio-Cortez traveled to St. Louis to prove her victory wasn’t a one-off by campaigning for Cori Bush, who was similarly taking on a longtime Democratic congressman.

“What I’m asking for you to do is to support my sister, Cori Bush,” Ocasio-Cortez said at a rally. “It is so important what we did, we just came off of this win in New York, but people were trying to say, ‘It’s just one place.’”

Bush lost that race but is challenging Rep. William "Lacy" Clay again in an August primary. She has more money and higher name recognition, and earned the endorsement of Bernie Sanders. But Ocasio-Cortez isn’t helping Bush this time.

After her victory in 2018, Ocasio-Cortez encouraged progressives to follow in her footsteps and run for Congress with the backing of the left-wing group Justice Democrats, even if it meant taking on powerful incumbents. Sixteen months later, the Missouri primary isn’t the only one Ocasio-Cortez is steering clear of. 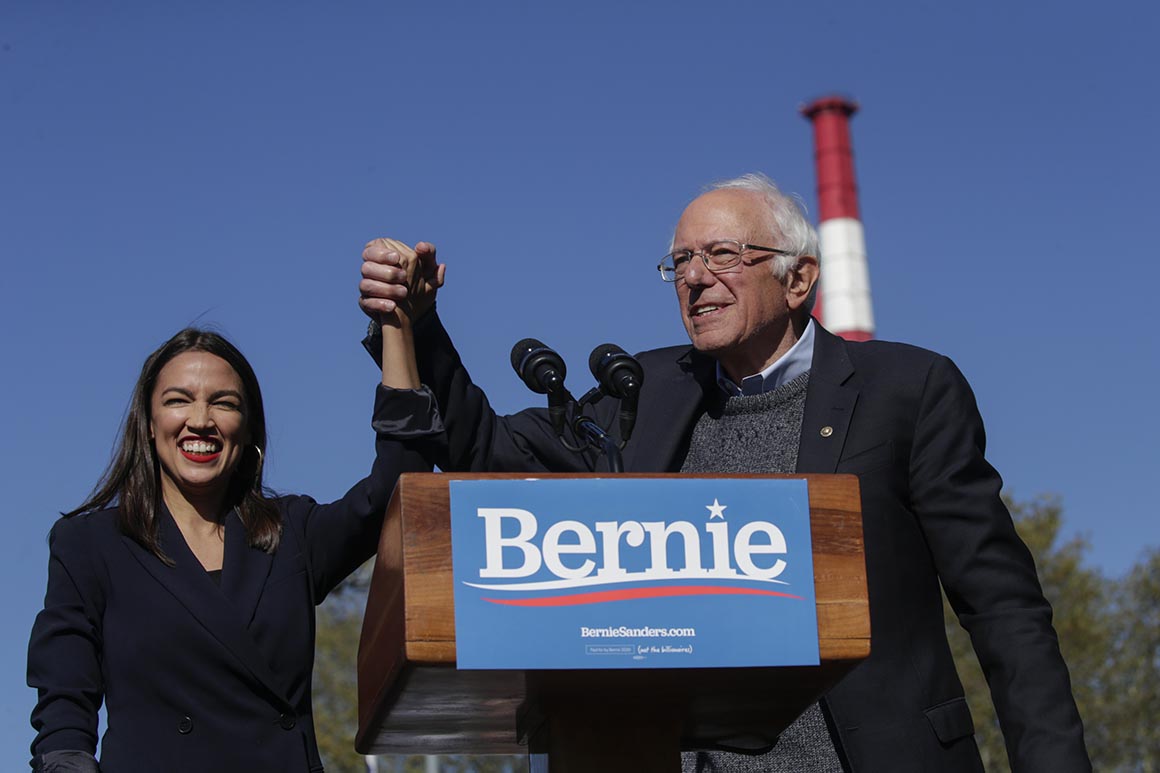 Of the half-dozen incumbent primary challengers Justice Democrats is backing this cycle, Ocasio-Cortez has endorsed just two. Neither was a particularly risky move: Both candidates — Jessica Cisneros in Texas and Marie Newman in Illinois — were taking on conservative Democrats who oppose abortion rights and later earned the support of several prominent national Democrats.

Ocasio-Cortez’s reluctance marks a break with the outsider tactics of the activist left, represented by groups like Justice Democrats. This election cycle, the organization is trying to boot not just conservative Democrats but also some liberal Democrats and to replace them with members who are more left-wing. In other words, to replicate what it pulled off against Rep. Joe Crowley in 2018 by recruiting Ocasio-Cortez.

Ocasio-Cortez’s shift coincides with turnover among top aides in her congressional office — replacing some outspoken radicals with more traditional political professionals — along with a broader reckoning on the left on how to expand Sanders’ coalition after his failure to significantly do so in the presidential primary. Some progressives have questioned whether Sanders should have softened his anti-establishment rhetoric and tried to build bridges with mainstream Democrats who voted for Hillary Clinton in 2016 rather than betting big on turning out disaffected and first-time voters.

Ocasio-Cortez’s endorsement moves are not a fluke but part of a larger change over the past several months. After her disruptive, burn-it-down early months in Congress, Ocasio-Cortez, who colleagues say is often conflict-averse in person, has increasingly been trying to work more within the system. She is building coalitions with fellow Democratic members and picking her fights more selectively.

The changes have divided her supporters, with some lamenting she’s been co-opted in short order by the system — and others asserting she’s offering the left a more viable path toward sustained power.

Gone are her plans for a “corporate-free” caucus, modeled on the uncompromising tactics of the conservative Freedom Caucus. The goal then was to force leadership’s hand to go further left.

After starting some high-profile fights with Speaker Nancy Pelosi and tweaking Democratic colleagues on Twitter early in her tenure, Ocasio-Cortez has been more conciliatory toward other House Democrats. In February, she dubbed Pelosi the “mama bear of the Democratic Party.”

Over the past few weeks, Ocasio-Cortez has also chided Sanders supporters for online harassment and delivered soft critiques of Sanders and some of his allies for being too “conflict-based.” The moves have drawn surprise praise from some moderate and veteran Democrats.

“The Democratic Party is the party of coalitions, not a cult,” said James Carville, a top strategist for Bill Clinton’s 1992 campaign and vocal critic of Sanders during the primary. “I’ve observed her. I think she’s really talented, that she’s really smart. Maybe she is — I don’t speak for her — coming to the conclusion that she wants to be part of the coalition.”

"There are some people on the left who thought that their views represented a strong majority, and the primary process has shown that voters diverged, that Sanders is winning a minority and smaller minority than he had four years ago,” Tanden said.

Instead of supporting Justice Democrats’ full slate of incumbent challengers, Ocasio-Cortez launched her own PAC earlier this year that’s been more focused on electing progressives in Republican-held or open seats. Ocasio-Cortez declined to be interviewed, but her new communications director, Lauren Hitt, noted that Bush’s August 4 primary is still several months away and that the congresswoman is monitoring other primaries.

Of course, it’s harder to endorse a primary challenger as an outsider than as an incumbent working with the people she’d be trying to remove. Some of the campaigns for incumbent challengers said they understood that dynamic but still hoped that things might be different.

Bush’s campaign manager, Isra Allison, told POLITICO that despite the lack of an endorsement this time, “We support AOC and the work she’s done and the attention she’s brought to these important issues. Our opinions on that trump any of her recent decision-making.”

“It’s understood that she’s in a precarious position endorsing incumbent challengers at all being in Congress,” said Brandon Sharp, a senior adviser for Morgan Harper, a Justice Democrats-backed candidate challenging Rep. Joyce Beatty in Ohio. That primary was scheduled for earlier this month but was delayed by the spread of the novel coronavirus. Sharp added that the campaign hasn’t formally asked for an endorsement.

Justice Democrats aides said Ocasio-Cortez remains the most anti-establishment Democrat in Congress. They pointed to fundraising and advocacy work she has already done for Cisneros and Newman. Cisneros lost her race, while Newman won.

“I can’t think of an elected politician who’s doing more to support primary challengers and a new generation of progressive leadership in the Democratic Party than her,” said the group’s spokesperson, Waleed Shahid.

Still, some left-wing supporters have been less enamored with Ocasio-Cortez’s evolution. Many were reluctant to speak publicly, however, given her stature and the fact that Sanders’ expected loss makes her a likely heir to his movement.

The changes go beyond rhetoric and include personnel. Two of her most senior aides who worked on her insurgent campaign have left her operation — chief of staff Saikat Chakrabarti, who co-founded Justice Democrats, left in August, and communications director Corbin Trent left her team earlier this month.

Some associates of Ocasio-Cortez thought Trent was hurting her by calling for tactics they felt were politically foolhardy. One ally recalled Trent wanted Ocasio-Cortez to go beyond "Medicare for All" and embrace a fully nationalized health care system like the United Kingdom’s, in an attempt to further stretch the boundaries of the debate.

Trent’s defenders in the progressive world believe his willingness to make enemies and indifference to what Pelosi thought helped push ideas like the Green New Deal into the mainstream.

Trent, who is working on Sanders’ presidential campaign, declined to comment.

The hiring of Hitt as Trent’s replacement speaks to Ocasio-Cortez’s new approach. An experienced operative, Hitt has worked for more moderate Democrats like Gov. John Hickenlooper and Rep. Beto O’Rourke during their recent presidential bids as well as left-wing candidates such as former New York gubernatorial contender Cynthia Nixon.

Chakrabarti was a firebrand on the Hill. After Ocasio-Cortez’s victory in November 2018, he earned enemies in the Democratic Caucus by declaring “we gotta primary folks.” They were livid in June when he called some members “new Southern Democrats.”

Ocasio-Cortez replaced him with legislative director Ariel Eckblad, who joined her office in January 2019 after working for Sen. Kamala Harris (D-Calif.).

Chakrabarti praised Ocasio-Cortez and her approach. “It’s hard to think of anyone who’s had more impact than her in their first year as a congressperson,” he told POLITICO.

Other progressives said Ocasio-Cortez’s more accommodating stance is a smart long-term strategy for a movement looking for a path forward. “She’s speaking in a way to create a majority in a way that Bernie is not interested in doing,” said Max Berger, the former director of progressive outreach on Elizabeth Warren’s campaign who also worked for Justice Democrats.

“If Bernie is Moses, then AOC is Joshua,” Berger added, referring to the biblical prophets.

Sean McElwee, co-founder of the progressive group Data for Progress, which collaborated with Justice Democrats in 2018 during Ocasio-Cortez’s primary campaign, agreed that her new approach is savvier.

“AOC gets to Congress and is like, ‘[Wow], there are a lot of people who agree with me,” he said. McElwee added that “she does have these big ideological goals,” but also wants to address immediate issues important to her constituents like ensuring the census materials are bilingual. “AOC is, I think, a very famous person but fundamentally a quite normal representative," he said.

Some left-wing activists believe that criticism of Ocasio-Cortez may be misplaced, more about people wanting her to be something she’s not.

Heather Caygle contributed to this report.

END_OF_DOCUMENT_TOKEN_TO_BE_REPLACED GameStop rallied on Monday after the brick-and-mortar video game retailer announced its succession plan as it seeks to pivot to e-commerce following a historic Reddit-fueled short squeeze earlier this year.Shares of GameStop jumped more than 8 percent in early... END_OF_DOCUMENT_TOKEN_TO_BE_REPLACED